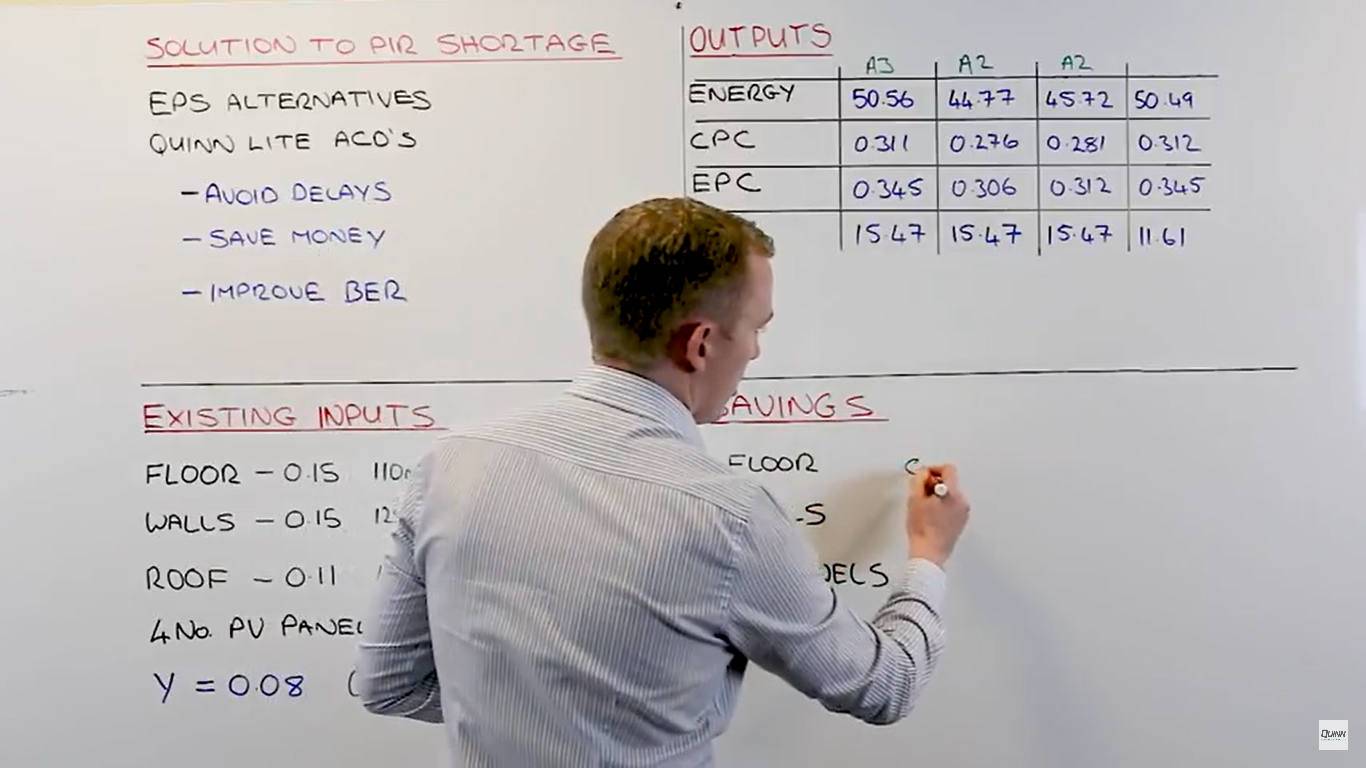 How do I beat the PIR insulation shortage?

With the current shortage of PIR insulation in the market, our technical team are receiving queries about alternatives to PIR in construction. In this previous video, we looked at EPS insulation as a very effective alternative to PIR in floor applications. We’ve also looked in this video at our Quinn Lite Accredited Construction Details, and how they can be used to significantly reduce thermal bridging, and with that, reduce costs. In our latest video, Jason Martin from our technical team looks at how EPS insulation can be combined with our Accredited Construction Details to avoid delays caused by the PIR insulation shortage, as well as saving on construction costs, and if required, improve the Building Energy Rating (BER). We recently worked with a large Developer and did some value engineering to see how we could avoid delays on site, and save some money. We took a typical 1,500 sq. ft. semi-detached house and we looked at the original specification within the BER calculation to see what we could do. In the original specification, the floor had a U-value of 0.15W/m2K, achieved with 110mm of PIR insulation. The walls had a U-value of 0.15 W/m2K also, achieved with 125mm of PIR. The roof had a U-value of 0.11 W/m2K, achieved with 400mm of mineral wool, as shown in Fig. 1.

There were 4 PV panels on the roof to achieve the renewable energy contribution requirements, and notably, the default Y-factor of 0.08 was used, which, in most cases, is a gross over estimation of the heat loss from thermal bridging in houses. In addition to these inputs, various other inputs include double glazed windows, gas boilers, airtightness, etc. They remain constant throughout the process, so we don’t need to go into any detail on those. Fig. 2 shows the outputs from the original specification.

Fig. 2 We can see that in the original specification, we have an A3 rated dwelling, with a primary energy consumption of 50.56kWh/m2/annum. The carbon performance co-efficient (CPC) is 0.311, and the energy performance co-efficient (EPC) is 0.345. The renewable heat contribution is 15.47kwh, which is greater than the 10 kWh we require. The first thing we did was calculate the Y-factor as the default Y-factor was used in the original calculation. Using our Quinn Lite Accredited Construction Details, we calculated the Y-factor to be 0.021. So, the heat loss calculated value is significantly lower than the default value of 0.08.

When the calculated Y-factor is input into the calculation (Fig.3), it automatically brings the BER rating down to an A2 rated house. The primary energy consumption significantly drops from 50.56 kWh/m2/annum to 44.77 kWh/m2/annum. There is also a drop in the CPC and EPC. The renewable heat contribution has remained the same as we haven’t done anything with the PV panels at this stage.

Fig. 3 Now we have a dwelling which is much more energy efficient than that in the original BER calculation. So, we then did some value engineering to see how we could help the Developer avoid delays due to the PIR insulation shortage, and also save some money.

The first thing we looked at was the floor insulation. The original specification had 110mm of PIR insulation, achieving a U-value of 0.15 W/m2K in the floor. We directly swapped out the 110mm PIR for 110mm Quinn Lite Pac EPSPearl insulation, and that gave us a U-value of 0.19W/m2K. There’s no under-floor heating in this house, so this value still meets Part L regulations.

When we input the new U-value of 0.19 W/m2K into the BER calculation (Fig. 4), the primary energy consumption only jumps slightly to 45.72 kWh/m2/annum, so we still have an A2 rated house. The CPC and EPC also increased slightly, and the renewable heat contribution remained the same as we haven’t done anything with the PV panels on the roof.

Fig. 4 So, by directly swapping the PIR insulation in the floor for Quinn Lite Pac EPS Pearl insulation, we’ve automatically saved €400 per house, and we’ve improved the energy rating of the house from an A3 to an A2 rated house. So, the Developer can already make significant savings on this project.

Next, we looked at the wall insulation and the PV panels on the roof. The original specification had 125mm PIR insulation in the walls. We reduced this down to 100mm PIR, which again helps given the current shortage. This change gave us a U-value of 0.21W/m2K in the walls, which still meets Part L requirements. We didn’t do anything with the roof insulation, but we reduced the number of PV panels on the roof from 4 down to 3, which will have an effect on the renewable heat contribution.

When we put these details into the calculation (Fig. 5), together with the changes we’ve already made to the floor insulation, the primary energy consumption goes back up to 50.49 kWh/m2/annum. The CPC went up to 0.312, and the EPC went up to 0.345. Notably this time, our renewable heat contribution has come down from 15.47kwh to 11.61kwh, which is still greater than the requirement of 10kwh. The combination of changes also brings the BER rating of the house back to an A3 rating.

Fig. 5 So, if we compare the original specification with the new calculations we can see that the primary energy consumption, CPC and EPC are all very similar, and our renewable heat contribution has reduced.

By reducing the wall insulation from 125mm PIR to 100mm, we can save the Developer €550 per house. By taking one PV panel off the roof, we add a further saving of €250. Combined with the €400 Euro we’ve already saved by changing the floor insulation, that gives us a total saving of €1,200 per house.

By implementing these changes there are significant savings to be made by the Developer. On this site there were 300 houses, so this amounted to a total saving of €360,000. The Developer was also able to overcome the issue of the PIR insulation shortage.

Our technical team are available to help with calculations and advice on how to make similar changes to your projects.