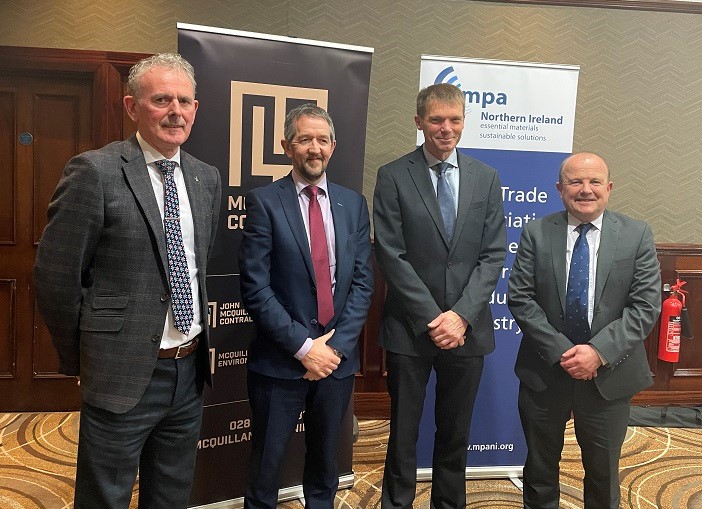 Paddy Mohan, Mannok’s Cement Sales Director, steps up to the role of Vice Chairperson for the Mineral Products Association Northern Ireland (MPANI), an industry body which represents the entire mineral products industry in Northern Ireland and an organisation which Paddy has been a member of for 24 years. This new role marks an important milestone for Paddy as he previously had to step down from his role of Vice Chairperson shortly after he was elected in 2009 due to an illness. In this interview, Paddy explains the importance of this new role to him and to Mannok, as well as the important role of the MPANI in the wider mineral products industry.

Did you have a role in the MPANI before and is this a progression?

I have been a member of the MPANI, since it began in 1998 when it was formerly known as the Quarry Products Association Northern Ireland (QPANI), and I’ve been on the Executive Committee for almost 20 years. I was actually appointed Vice Chairperson back in 2009, but only for a short period of time as I was diagnosed with Parkinson’s disease in the same year. Being diagnosed with Parkinson’s disease was a shock and I had to come to terms with it.  However, I have tried to get “back up on the horse”, so when you ask is it progression, then yes, I think one could call it that.

Were you elected to be Vice Chairperson or did you put yourself forward?

I certainly didn’t put myself forward for this role as I prefer to keep my head down and contribute in other ways.  I have known Gordon Best, Regional Director of MPANI for many years, in fact I remember when Gordon was interviewed for his position by past Chairmen, Jack Duffy and Willie McNabb. Jack and Willie reported back to the Committee to let us know they had appointed a young vibrant fella, but there could be a problem holding him back. I must say it turned out to be an excellent appointment and it was Gordon who recently asked to me consider taking on the Vice Chairperson role.

When Gordon asked me to consider taking this role, which I was subsequently elected by members of the committee, I was surprised but greatly honoured and said yes before giving it a great deal of thought. I know I have support from both my colleagues within Mannok and the members of the MPANI which will be very helpful to me as I take on this role.

Why is it important for Mannok to be involved in the MPANI?

I believe it is vital for Mannok to be involved in the MPANI not only because quite a number of its members are customers of our Cement division, but it also gives us the opportunity to share issues we are facing and work with others in the industry to solve matters together.

How important is the MPANI for the whole industry?

The importance of the MPANI for the whole mineral products industry cannot be understated! The association led by Gordon Best is the voice for the whole industry in Northern Ireland and it has managed engagement with the government and councils on issues of aggregates tax, health and safety, environmental compliance, the green agenda, Brexit and COVID-19 to name a few issues which have all impacted the industry.

What are your ambitions for your role as Vice Chairperson?

In my view the Vice Chairperson is a supporting role and that is what I intend to do, i.e., I will be available for our newly appointed Chairperson, Paul Grogan of McQuillan Companies, and the MPANI’s Regional Director, Gordon Best.

I have never failed to support the association since becoming involved and I must add it works both ways. With health permitting I am looking forward to taking on my new role and dealing with all the challenges and supporting the mineral products industry in Northern Ireland.