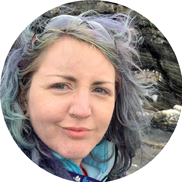 My name is Kez and I am a PhD Student at Queen’s University Belfast researching the ecology of the Common Kestrel in Ireland. I am an ornithologist working on various projects across Ireland including work with the Irish Brent Research Group and ecological studies on waders and waterfowl migration. If I am not behind my desk working on my PhD, you’ll find me out catching and tagging birds for research projects or hiking with my dogs, although my binoculars are never left behind!

I love working with birds. It’s a joy to know I can step outside and be greeted immediately with the sight and sounds of birds no matter where I am. However, bird populations are not a guarantee and that is why I work for them. Birds have a huge cultural importance and are highly valued as part of our natural environment. How many of us have a bird feeder in our gardens so we can enjoy the birds? They occupy a wide range of environments from urban and industrial to rural, forested and agricultural landscapes across Ireland, and as such they often are the first indicator that something is going wrong in the ecosystem. And their populations worldwide are declining – it is now estimated that one in 8 bird species is globally threatened.

Ireland has the lowest diversity of breeding raptors than any other country in Europe. The introduction of pheasant cultivation for gamebird shooting across the island from the 1850s led to advances in trapping and hunting raptors and by 1920, Buzzards, Marsh Harriers, Osprey, Red Kites, Goshawks, White-tailed Eagles and Golden Eagles were all extinct in Ireland. Buzzards have made a remarkable come-back in the last 30 years and through re-introduction programs, we now have Red Kites and White-tailed Eagles in our skies again although our raptors are still faced with persecution and land-use change.

They are difficult to monitor as they occur at low population densities and are usually difficult to detect. However, they are vitally important to monitor as they are usually one of the first indicator that something is wrong in the ecosystem. They are highly sensitive to land-use change and are highly susceptible to local extinction. They are also fully protected by European law, but as they are poorly monitored, it is difficult to determine their conservation status.

In Ireland, we have two raptor study groups who aim to monitor the populations of our raptors across the island: The Northern Ireland Raptor Study Group (https://www.nirsg.com/) and The Irish Raptor Study Group (https://www.irsg.ie/). Both groups are voluntary organisations that collect and hold information on our raptor breeding and wintering sites to record the status, distribution and breeding success of each species. Through this monitoring, long and short-term population trends can be generated and identify the species that are most at risk. These monitoring programs have led to extensive research in Hen Harriers in the West of Ireland, Barn Owl breeding programs, Peregrine Falcon persecution monitoring and also highlighted the population decline of the Common Kestrel, which is the topic of my PhD.

My PhD hopes to shed light on the conservation status of the kestrel in Ireland, one of our smallest and most well-known species of raptor. In my regular Kestrel Blog, I will keep you informed of the behaviours and activities of the Kestrels in Mannok’s quarry and hope you will follow their journey with me in the coming months.