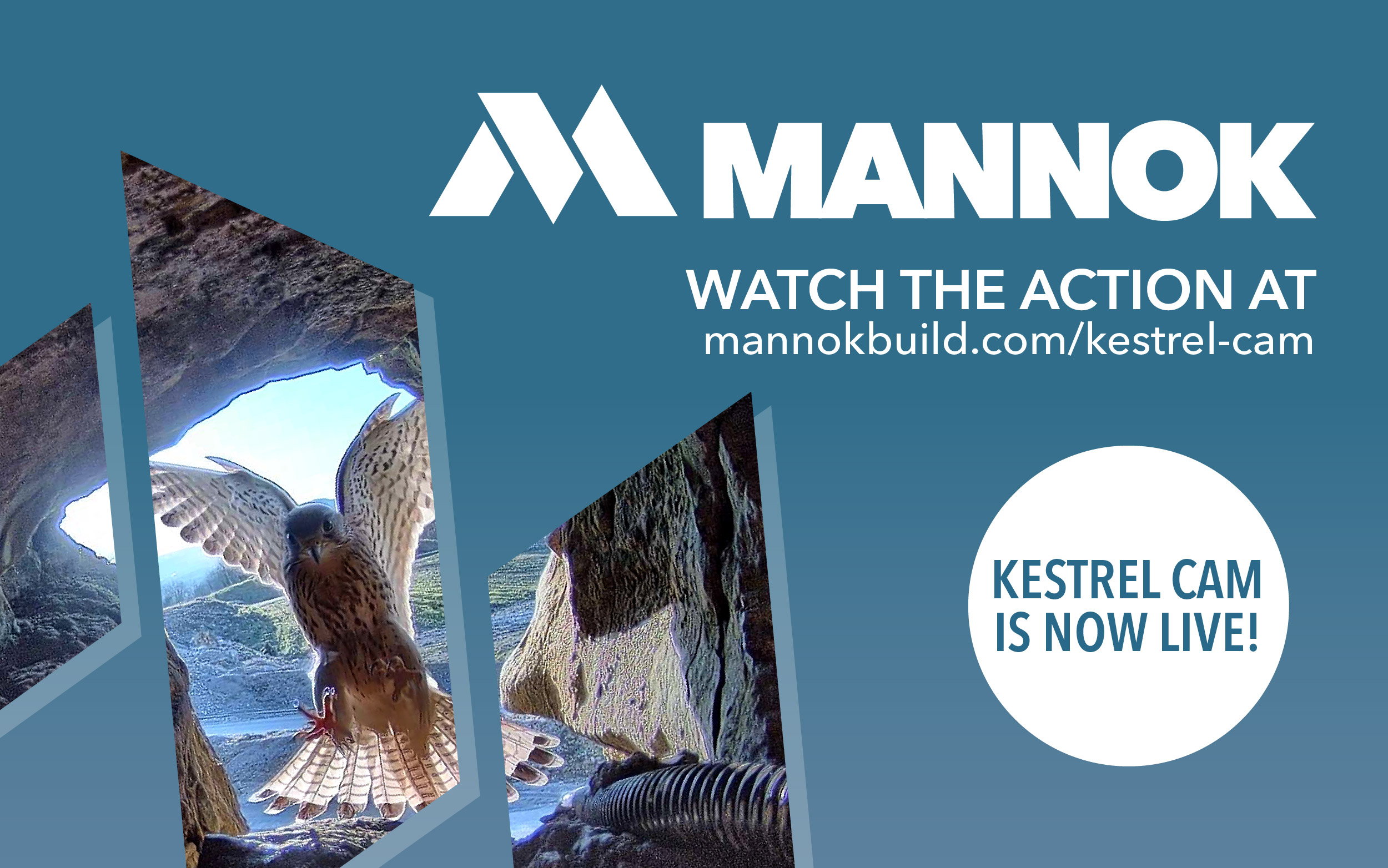 This year Mannok relaunched Ireland’s first Kestrel Cam for the second consecutive year to help raise awareness and interest in the common kestrel, whose population is on the decline on the island of Ireland and is now a red-listed species, meaning it is at risk of extinction. Through the Kestrel Cam, which is a live streaming web cam accessible via Mannok’s website, everyone can watch a breeding pair of kestrels who have returned to nest and raise young in the company’s quarry. Also, for the second year, Ecologist and Licensed Bird Ringer, Kez Armstrong, visited the quarry to ring the chicks, and for the first time she was able to colour ring the chicks as a result of a new project initiated by Irish Midlands Ringing Group to significantly improve the visibility and research of kestrels.

To re-establish the Kestrel Cam for the second year, over the winter months when the birds had vacated the nest, Mannok’s Environmental Team, collaborated with Netwatch to carefully install non-intrusive cameras licenced by National Parks and Wildlife Service (NPWS).

Although these pair of kestrels have nested in the same nook of Mannok’s quarry face for the last five years, there was no certainty that they would choose the same nest. Thankfully the Kestrel Cam project was able to re-launch for a second year as the pair were spotted inspecting the same nest in February, followed by the male successfully proving his hunting skills were sufficient to support a family. 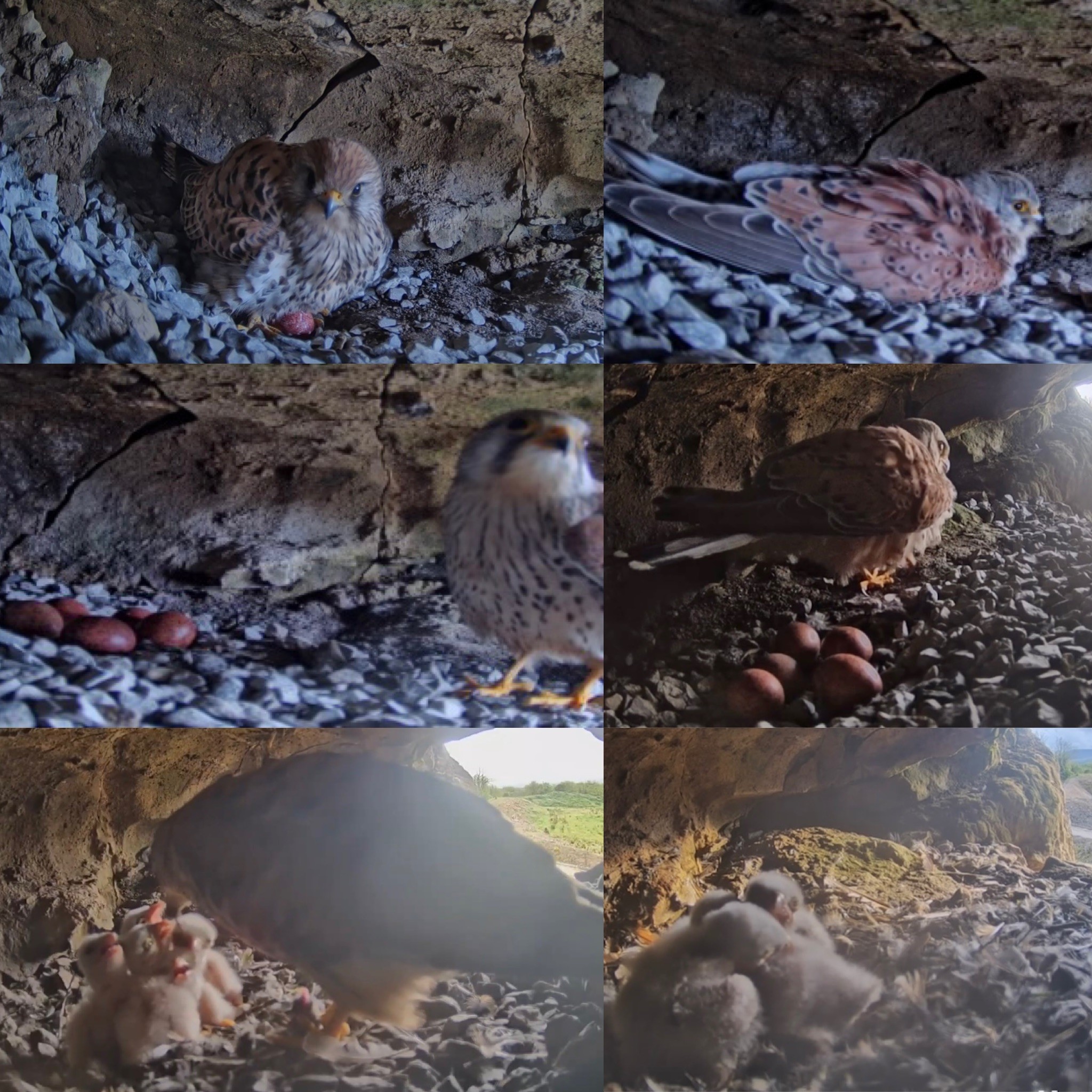 While the female was spending more time in the nest, she laid her first egg on the 6th April, and the Kestrel Cam was introduced publicly for schools, Mannok employees, the local community and bird watchers to see first-hand a pair of kestrels working together to raise a family. 11 days later the female had laid 5 eggs in total and over 4 weeks later, 5 chicks had hatched.

“Following the success of last year, we are delighted to launch Kestrel Cam once again. As a company with a significant area of landholdings, we have a duty to not only enhance and protect our local biodiversity while we operate, but to also raise awareness of the nature that surrounds us. Through this live feed capturing nature right on our ‘door-step’, we want to help everyone, including our people, to appreciate the nature that surrounds us.

Kestrel Cam is one of many projects we are working on for the benefit of the environment, and we have plans to do much more, with many of our projects road mapped in our Mannok 2030 Vision. The Vision is our sustainability strategy which details our targets from now until the end of the decade, which are centred around three key pillars of People, Planet and Partners. Within our Planet pillar, we focus heavily on decarbonisation, biodiversity and resource efficiency, so our Kestrel Cam project is aligned to our environmental priorities.” 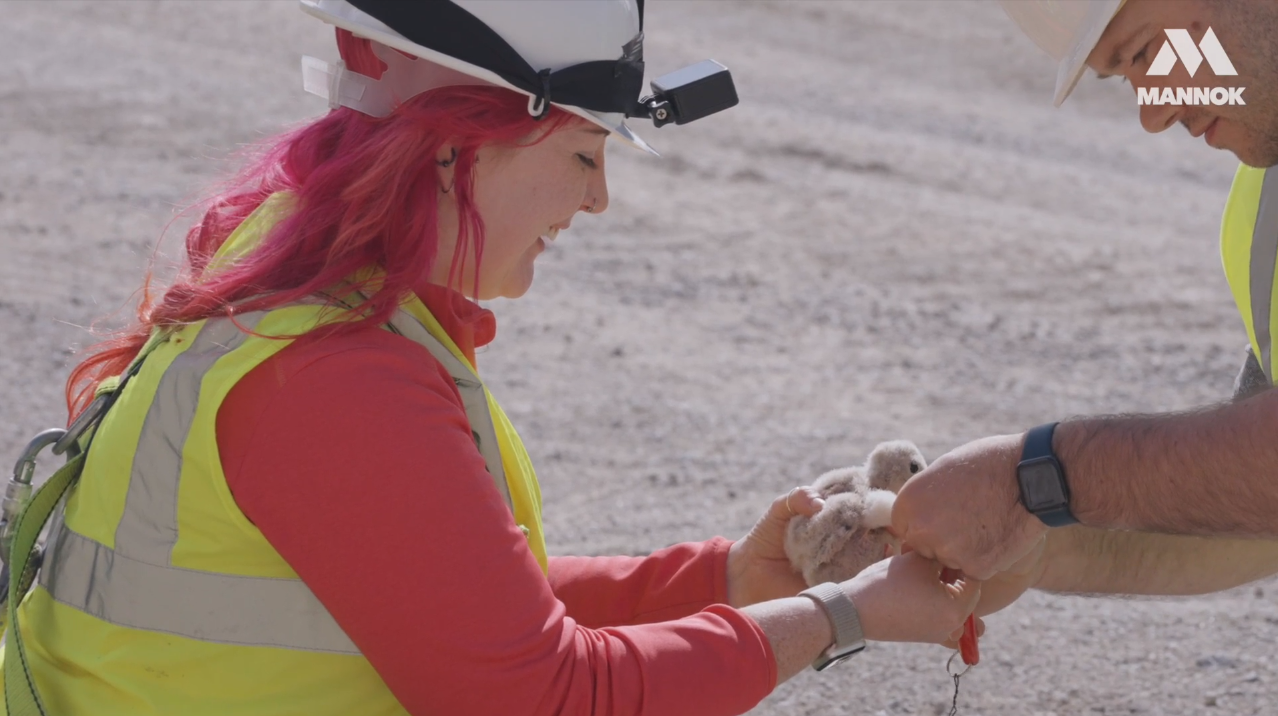 On Thursday 26th May as the chicks were 11 days old, Ecologist and Licensed Bird Ringer, Kez Armstrong, who’s been ringing birds for nearly 10 years and worked with over 100 species, visited Mannok to ring the chicks. Ringing chicks is a vital part in the study of kestrels as it makes each bird trackable and when their sightings are reported, it improves understanding of birds and helps protect the species.

During her visit to the quarry, which remains fully operational with appropriate precautions not to disturb the birds and their habitat, Kez commented on the importance of ringing chicks, and she also revealed how excited she was to be colour ringing kestrel chicks, 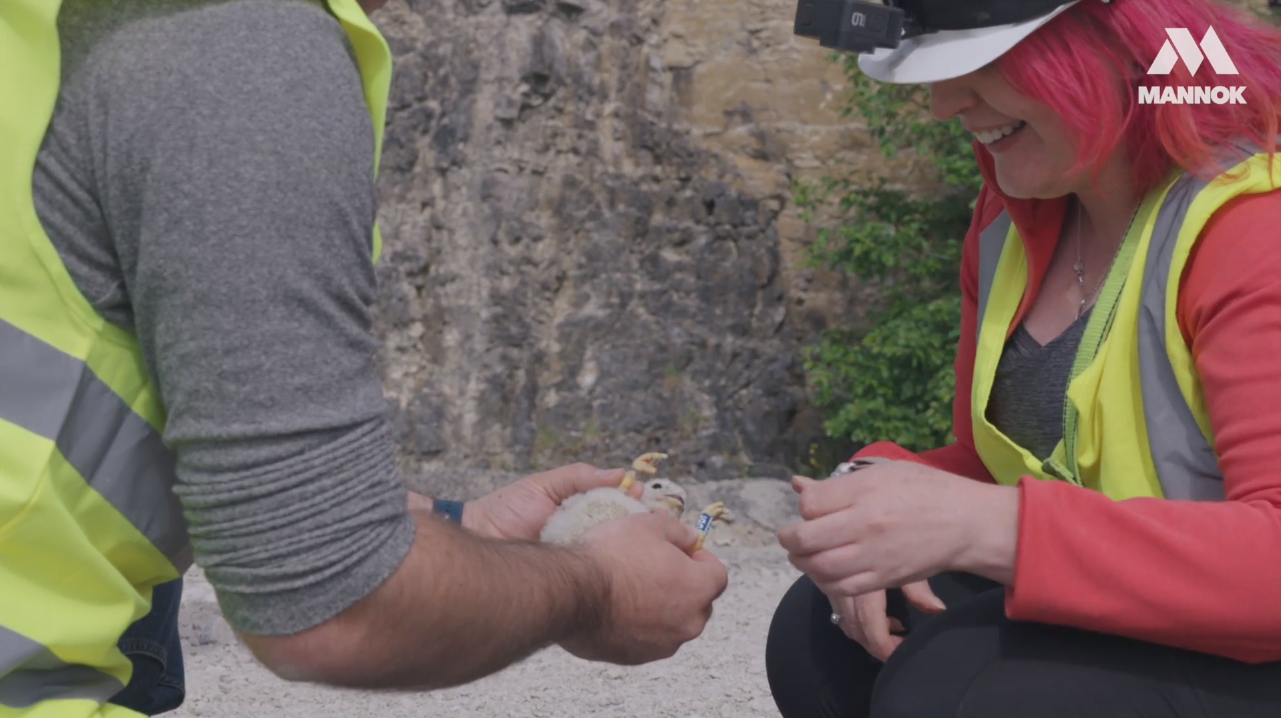 “The reason we ring birds is to capture information on bird’s behaviours, for example, to see how many birds are born in each nest, how far birds are travelling and where they are travelling. It is a nice, non-invasive method of tracking birds. It doesn’t hurt the bird or doesn’t harm the bird.

I am really excited that we have colour rings on the chicks this year and that’s the first time I have put a colour ring on a kestrel. It’s a new ringing project that is being run by the Irish Midlands Ringing Group. Soon we are going to be colour ringing kestrels across the island and am I very excited about the information we will find out as a result of colour ringing.” 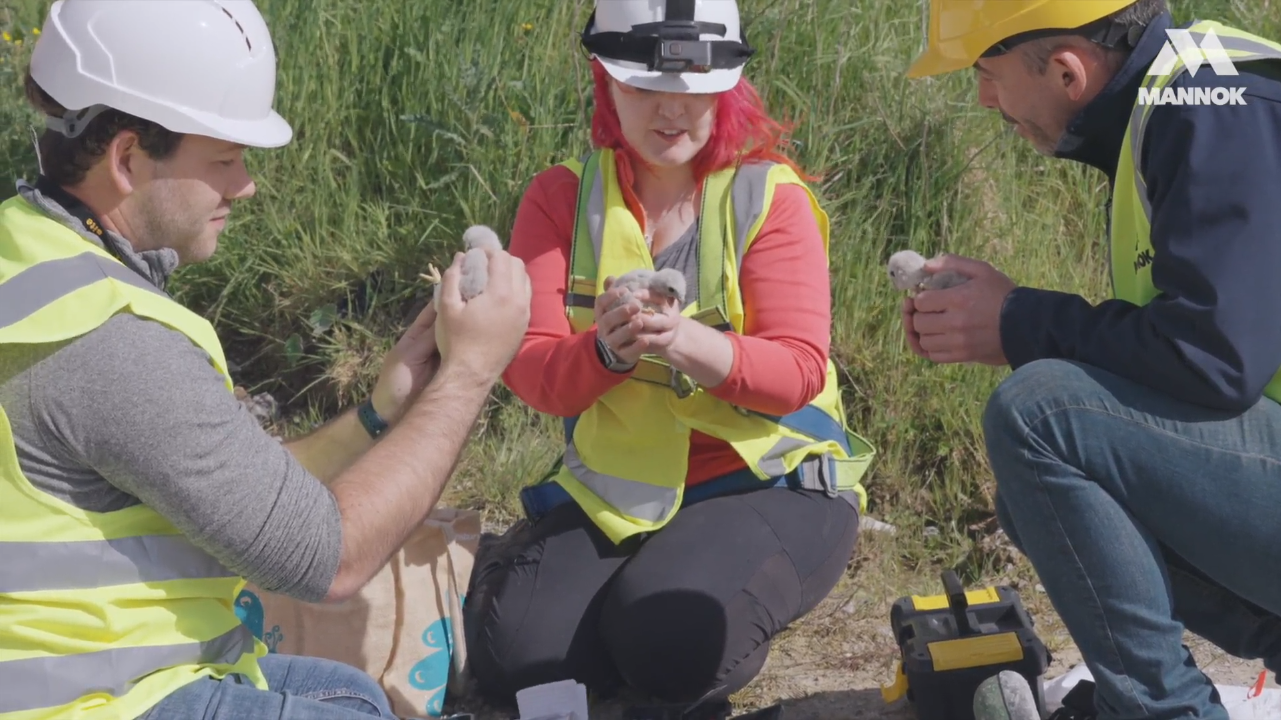 Colour ringing involves fitting a unique coded colour ring to a bird’s leg which is more visible, and it means birds can be identified and tracked more conveniently through photography and binoculars. The small metal ring which is usually used is often hard to read and can only be visible when a bird is in very close in proximity, so the colour coded system will help improve scientific study of the birds’ movements.

Kez has been studying the common kestrel in Ireland for some time and she focused her recent PhD on the species which will be published very soon. During the ringing of the chicks, Kez shared some details to highlight why kestrels are red listed in Ireland.

“This is a bird that doesn’t build its own nest, they seek out a cavity. 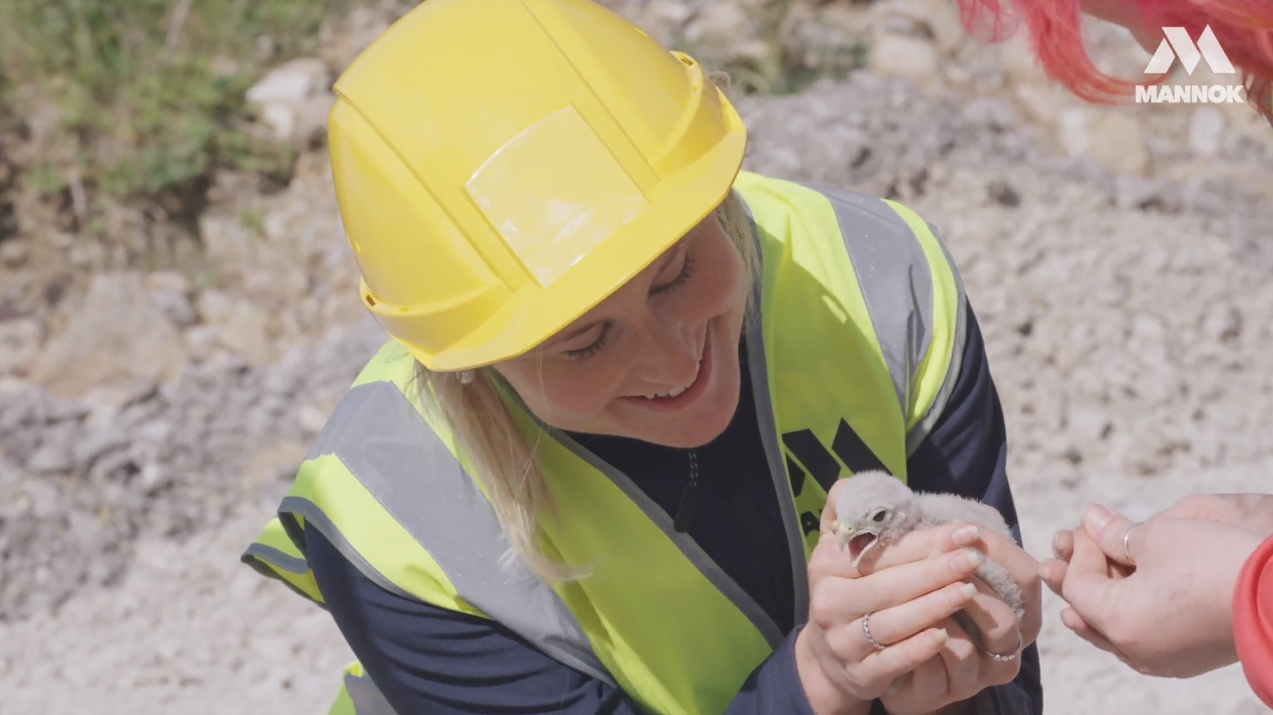 Traditionally, they would have been nesting in old woodpecker holes in trees, like old oak trees with natural cavities. Unfortunately, with a lot of agricultural intensification, we have lost a lot of our ancient forests which have natural cavities, so kestrels have had to seek out other cavities. Quarries tend to have manmade cavities and they are now a preferred and important habitat for Kestrels and many other birds.

Mannok’s quarry has a perfect cavity for this pair here today, who have been coming back for at least 5 years, and they’ll return again and again.”

Over the next few weeks, the chicks will start to feed themselves, their adult feathers will begin to appear, and they will take their first flight. In late June and throughout July, the chicks will return to their nest sporadically. 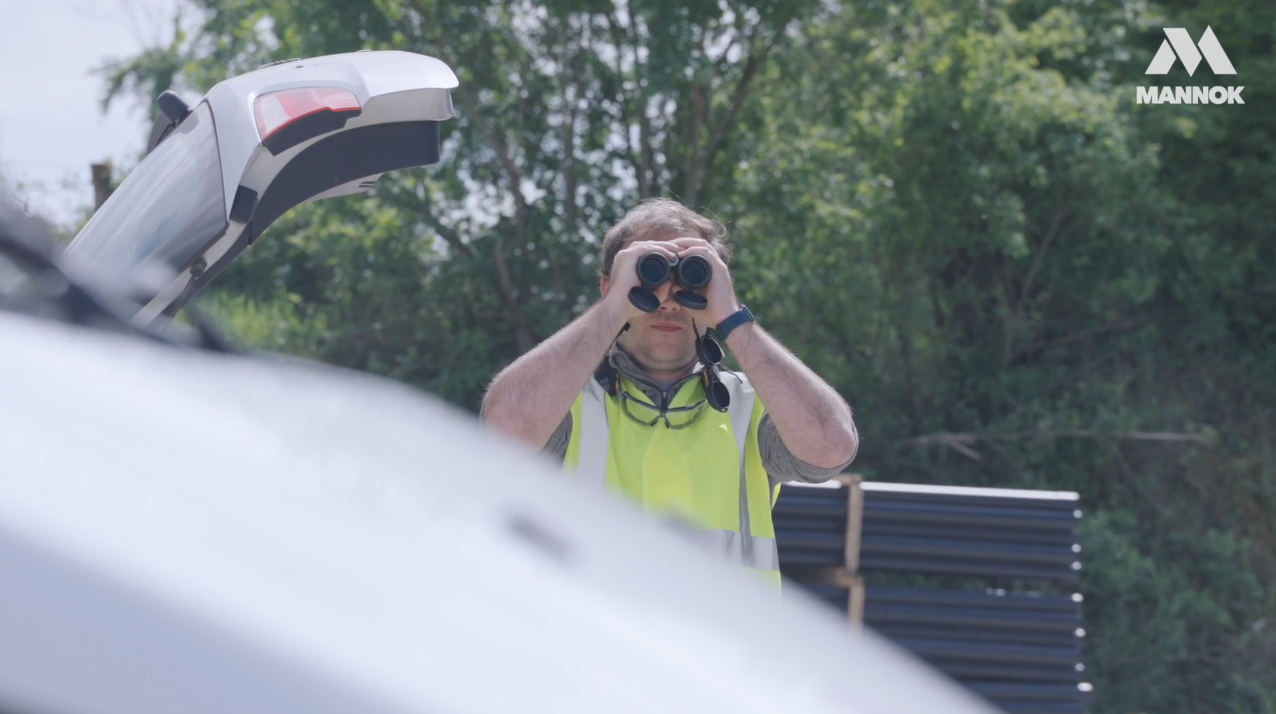 Kez, who is also enjoying the second year of Kestrel Cam, wished everyone an enjoyable few more weeks watching the live feed and after the chicks fledge and move on as adult birds, she requests everyone to, “get out and start reporting colour ringed kestrels as you are going to see a lot more of them in the next 2 – 3 years, and with everyone’s help we hope to build a good picture of what our Irish kestrels are doing.”