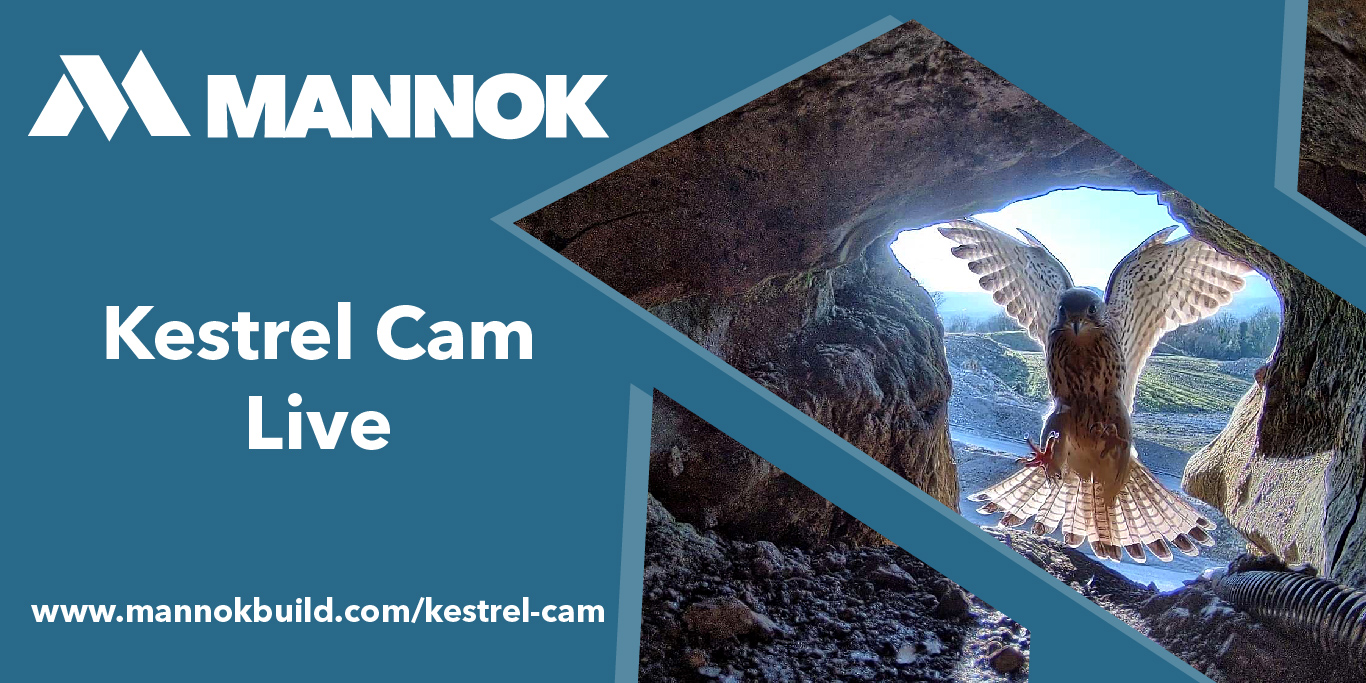 Ireland’s very first “Kestrel Cam” has been installed in one of Mannok’s Quarries and will be live streamed online in the coming months so viewers can get an exclusive look inside an Irish Kestrel nest throughout the breeding season. The live stream has been launched on World Earth Day to highlight the need to protect our local wildlife and wider eco systems, particularly with the Common Kestrel having recently been placed on the Red List as a species now at risk of extinction in Ireland, and can be viewed on Mannok’s website.

Two discrete cameras have been installed in the nesting location under license from NPWS and in partnership with Netwatch to enable Queen’s University to study the birds and to raise awareness of the need to protect the species and other wildlife across Ireland. Queen’s PhD student, Kez Armstrong, will study the nesting pair of Kestrels, who have returned to the same nesting site over the last few years to successfully breed.

“This initiative is part of our drive to protect and enhance biodiversity on our land and across our local region as an important element of our wider sustainability commitment, and we’re very pleased to be in a position to help highlight the need to protect our native wildlife and the recently red-listed Kestrels in particular. Our Environmental Team have worked very closely with Queen’s University’s Kez Armstrong and Netwatch’s John Kennedy to ensure the safe installation of the cameras, with the welfare of the Kestrels as the top priority.

This is an opportunity to highlight the risk to wildlife such as these Kestrels and to bring that into focus for a wider audience, and we will be working closely with educational institutions and wildlife and biodiversity groups, as well as engaging the wider public through the Kestrel Cam stream and a Kestrel Blog from Kez, to play our part in helping to raise awareness and understanding.

It is fitting that the live stream from within the nest is launched on World Earth Day, which helps focus all our minds on the bigger picture and what we can all do to help ensure a more sustainable future for our planet. As a large manufacturer and employer in our region, we have a very important role to play in this sustainability drive and it’s a responsibility we take incredibly seriously.”

Live feed from the nest will be broadcast on the Mannok website for the duration of the project, together with a Kestrel Blog from Kez to keep people informed of progress and allow people to follow the story of the nesting pair of birds.

Oisin Lynch of Mannok’s Environmental Team, who has been working on the initiative for several months, explained what this has involved, saying,

“As these are the first Kestrel nest cameras to be installed in Ireland it will give us important insights into the behaviours of the birds which we haven’t had access to previously. Our number one priority is the welfare of the birds, so there has been a great deal of collaboration with a number of wildlife groups and relevant licensing bodies and we’ve worked very closely with Kez Armstrong of Queen’s University, John Kennedy and the Netwatch team to install the cameras in a way which would not disturb the birds or put them off nesting in this location. We’ve observed them from a distance for the past few years, so we’re very much looking forward to getting a closer view to help understand the birds better.

We recognised that with the cameras in place, there was an opportunity for us to engage the wider community in the project in a bid to raise awareness and interest in the Kestrels, particularly given the threat the species is under. As well as live streaming the feed and sharing the story on our online channels, we will continue working closely with local conservation and wildlife bodies and engaging with local schools to help achieve this. We believe there will be a lot of interest in the project and with eggs already in the nest, we’re very excited to follow the story and hope to see some healthy chicks in the coming weeks. We’re delighted to contribute to the knowledge gathering and awareness building of one of Ireland’s most at risk birds.”