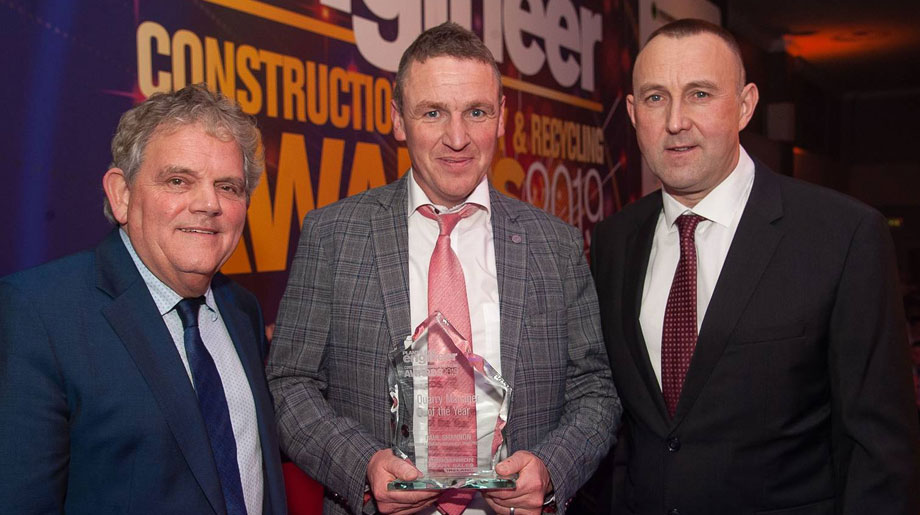 He was presented with the prestigious Quarry Manager of the Year award, sponsored by Dungannon Plant Sales, during a glittering ceremony, compered by television and radio sports presenter Adrian Logan, at the Crowne Plaza Hotel in Belfast.

Organised by the publishers of Plant & Civil Engineer, 4SM (NI) Ltd, it was attended by hundreds of guests and leading figures from the plant, construction, quarry and waste management sectors. With 20 separate categories, the event is widely regarded as Ireland’s premier platform of recognition for those operating across all sectors of the industry.

Having spent a number of successful years as a manager at the company’s Doon Quarry, Paul was appointed Manager of a newly acquired site earlier this year, with the task of transforming it into a fully operational quarry and creating and implementing a development plan.

“His experience in quarry management was key, coming from the role of managing a well-established quarry, which had seen him excel as an effective Quarry Manager,” says the company.

Significant investment has been made in the new quarry at Crievehill, and Paul has been instrumental in the planning and delivery of a number of infrastructure improvements. As well managing site operations, he has responsibility for health and safety, environmental and sustainability matters.

He also plays a key role in biodiversity, working with local wildlife groups and councillors to ensure habitats and behaviours of native wildlife aren’t disturbed, focusing on peregrine falcons nesting in the quarry and bats nesting around the perimeter.

Planning is also underway to utilise surrounds of the active quarry as part of Quinn’s involvement in the All-Ireland Pollinator Plan. Native trees and wildflower will be planted in Spring to help boost pollinator numbers and provide a habitat for other native species.