Quinn Building Products and National Buying Group (NBG) have announced an extension of their Master Grade cement exclusivity deal which was first agreed in 2018. The deal means that Quinn’s Master Grade product will only be available in GB to NBG merchants for the next two years.

Quinn’s cement range, including their Master Grade cement, was launched in early 2018 when the company introduced three new bagged cement products, all of which are available in both paper and weatherproof plastic bags. The new extended product range included Master Grade, Premium Grade and General Purpose Cement. To date, Master Grade has been solely available to NBG merchants thanks to the exclusivity deal which was announced upon launching the product, and which was extended for a further 12 months at the start of 2019.

Following the success of the partnership with NBG, Quinn have now agreed a further extension to the deal which will continue until the end of 2021. Speaking of the deal, Quinn’s GB Sales and Marketing Director, Lee Gillman, said,

“There is no doubt that our partnership with NBG has made a significant contribution to the success of our bagged cement range, and our Master Grade product in particular, so we’re delighted to agree an extension to our exclusivity deal with NBG for supply to their merchant members.

Sales have substantially increased since we extended our product offering, with Master Grade sales exceeding expectations. We’ve had great feedback from merchants about the quality of the cement, which has proven to be very popular with their customers. Builders and plasterers in particularly love working with Master Grade, largely down to the workable texture and cohesive mix.” 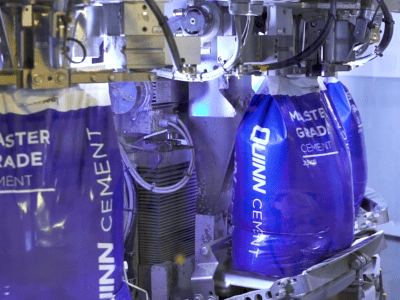 Quinn’s partnership with NBG has gone beyond the supply of products and exclusivity deals, as the pair have worked closely together for over 12 months on the development of Genius by Quinn, the new app for merchants which has recently been launched by the company.

The Genius by Quinn app has been designed to provide a practical and functional solution to Quinn’s merchant customers, who will have real time order and delivery tracking and access to all product information and documentation on their handheld device. The app also features very useful tools, such as the product converter tool and easy access to the expert support of the Technical by Quinn team, all of which is designed to help the merchant sell more Quinn products. NBG merchants, many of whom were heavily involved in the research, design and testing stages of the app’s development, will also enjoy exclusive access to Genius by Quinn initially.

It is Quinn’s drive to provide innovative, value adding solutions such as this, which helped them pick up three awards at the recent NBG Awards 2019, including the coveted overall Brand of the Year Award. Quinn were also named Brick and Block Supplier of the Year and Quinn Cement won General Build Supplier of the Year, with a second-place finish in the Roofing and Insulation Supplier category.