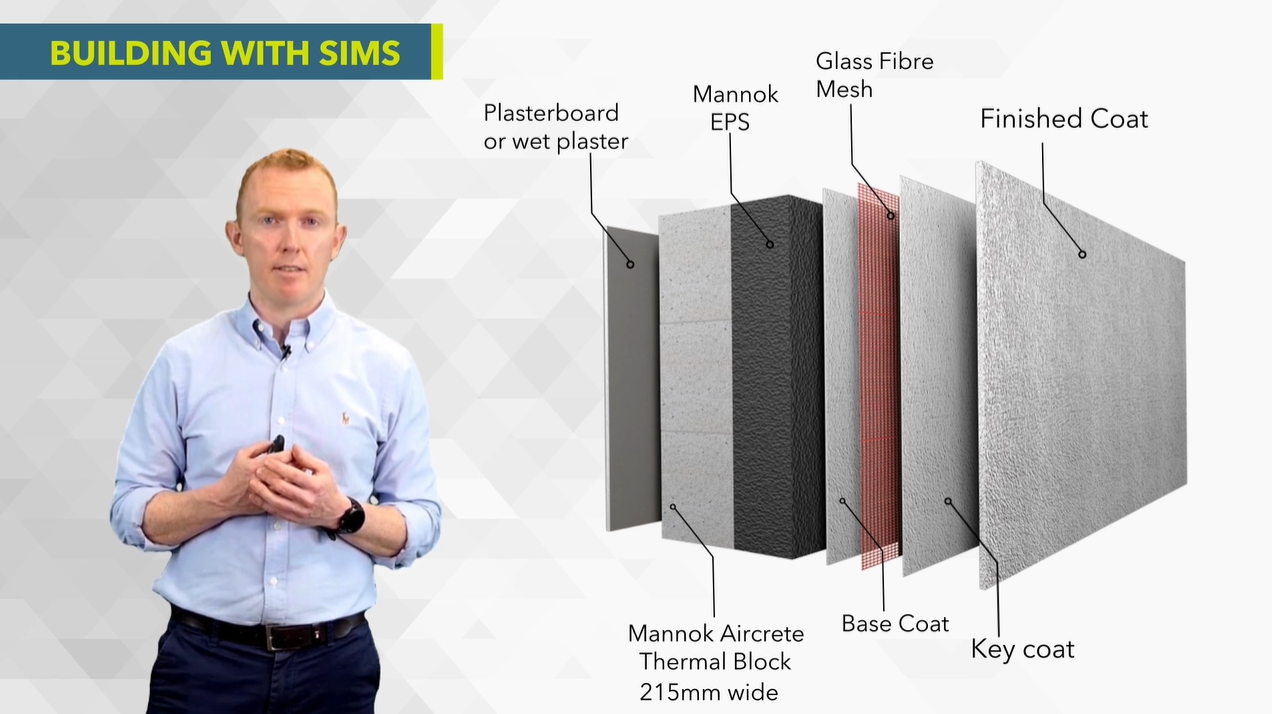 What is SIMS by Mannok and what are the benefits?

A look at the benefits of SIMS by Mannok, our Super Insulated Masonry Solution with our Technical by Mannok team.

What is SIMS by Mannok?

The term SIMS stands for Super Insulated Masonry Solution. Quite simply, it consists of a single leaf Mannok aircrete block built using thin joint mortar, with an external wall insulation system. The external wall insulation comprises of a layer of insulation which typically is expanded polystyrene (EPS), mechanically fixed or adhered, or a combination of both, back to the Mannok aircrete block. Onto that, we put a base coat, a glass fibre reinforcing mesh, a key coat, and then it’s finished with either acrylic, silicone, or monocouche render. Internally, it’s finished with either traditional sand cement, a thin coat plaster which is generally sprayed on, or plasterboard on dabs. 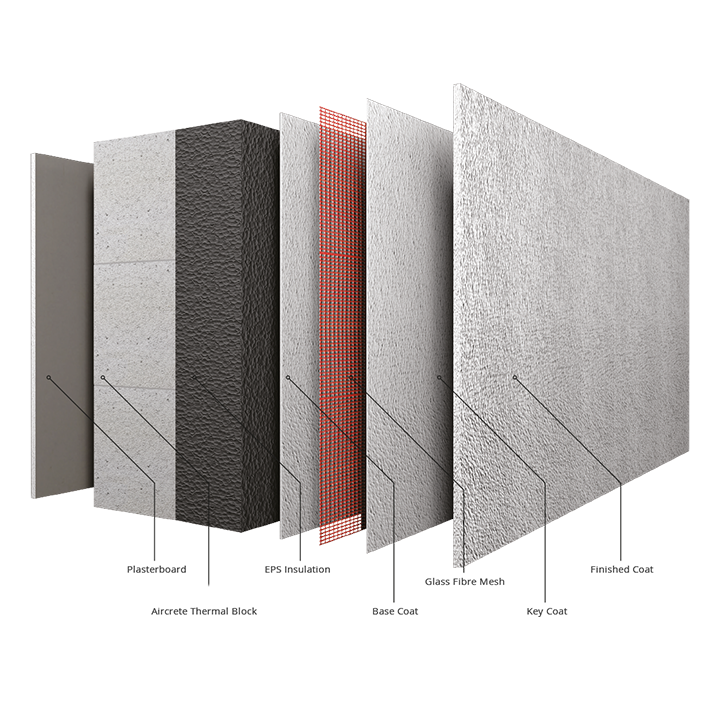 Thin joint mortar is a polymer modified cement-based mortar. It generally comes in a 25kg bag and you simply add water and mix it with a paddle mixer on site. The mortar is applied in 3mm thickness, so your joint thickness is only 3mm, and it’s applied using a scoop with a serrated edge, quite like a tiling trowel. The scoop then puts on enough mortar just to give you a consistent 3mm joint.

The strength of the mortar is typically 10N/mm2, so it’s much stronger than traditional sand cement mortar. The key point about it also is that it’s very quick setting. Initial setting takes place in about 10 minutes, and the mortar is fully set in 1-2 hours, which means that you’re not restricted to the coursing heights that you can build in one day. You can build a storey height in a day and another storey height the next day, which means that you can build your external wall faster, get your roof on faster, and get your internal trades in faster. So speed of build is one of the key benefits of using thin joint mortar.

So how does SIMS compare to traditional cavity wall construction?

Figure A shows a typical 350mm wide cavity wall, with 100mm inner leaf, 100mm outer leaf, separated by 150mm cavity, with your insulation in the cavity.

Figure B shows the makeup of a SIMS constructed wall, with 200mm wide single leaf Mannok aircrete block. To achieve the same thermal performance as the wall in Figure A, we need 140mm of EPS insulation on the outside.

Looking at it from a speed of build point of view, we can quite clearly see the structure in Figure A has 6 blocks to build, whereas the SIMS wall in Figure B only requires 3 blocks to gain the same height. So already, SIMS, or single leaf masonry, is twice as quick to build than your traditional cavity wall construction. In addition to that, it has been proven that building using thin joint mortar is 20% faster than building traditional sand cement mortar. That being the case, and combined with the reduced number of blocks, building your external leaf of your building using SIMS is 60% faster than traditional cavity wall construction.

That means you get your external wall built up quickly, getting your roof on faster and making the building weathertight. Then you get your internal trades in much faster. You can then start your external insulation system when it suits. This is a huge benefit of SIMS by Mannok, particularly given the current demand for rapid build housing.

Moving on to strength and looking at the structural properties of the wall, we’ve had an independent study carried out on a typical gable end wall of a semi-detached house. The study compared the 350mm cavity wall represented in the figure below. There was a nominal lateral load applied to each wall of 1.05KN/m2, replicating wind load. The study revealed that on the traditional cavity wall we could apply a load of 100KN/m on the wall. With the same lateral load applied to the single leaf Mannok aircrete wall built with thin joint mortar, we could apply 291KN/m. 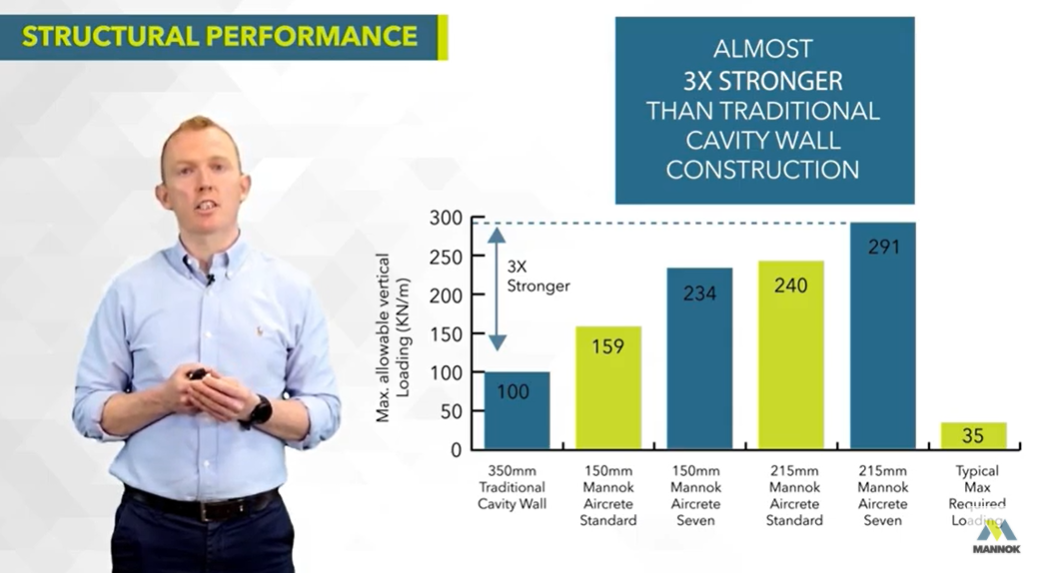 We can see from these results that SIMS is almost three times stronger than traditional wall construction for the same wall thickness, which is another significant benefit to the system. We also carried out the study on a 150mm Mannok aircrete wall built with thin joint mortar, and it was still twice as strong as the cavity wall represented in Figure A.

SIMS can easily achieve 6 hours fire resistance, which is 3 times as much as traditional cavity wall construction, which gives about 2 hours resistance. Perhaps most significant is how timber frame houses perform on this important safety aspect, giving just 30 minutes of fire resistance. 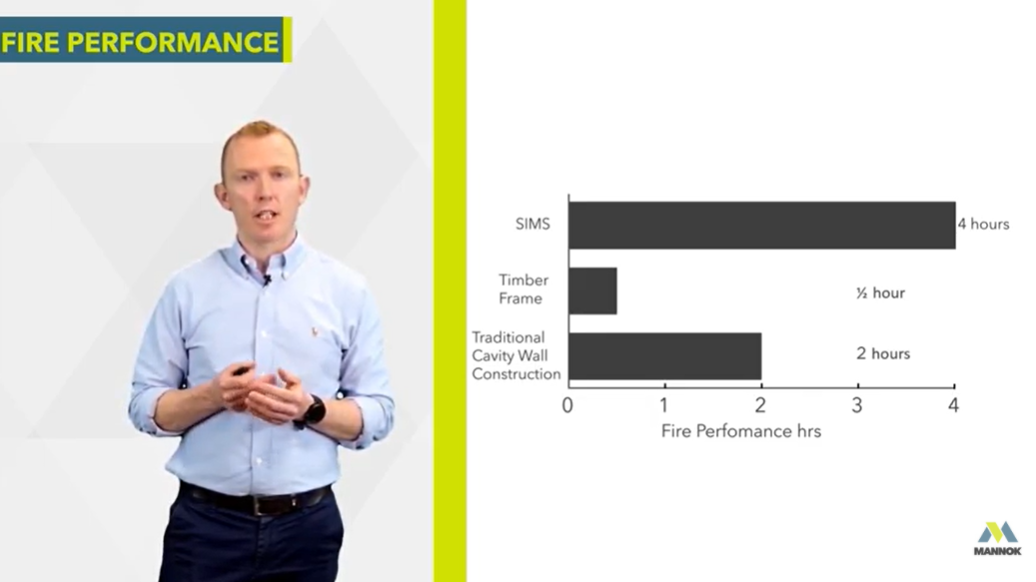 The makeup of a SIMS wall has two thermal elements, as the Mannok aircrete block is also a thermal element, in addition to your EPS insulation, so you can achieve any U-value you want using SIMS as you’re not restricted to the amount of insulation you can put on the outside of the wall. With cavity wall construction, the amount of insulation you can use is restricted by the width of your cavity, and therefore, so are the achievable U-values. If your cavity gets any wider than 150mm, you’re into structural wall ties and more expense. So you are restricted by your cavity in Figure A, whereas in the SIMS wall, you don’t have the same restriction. You can get U-values down as low as 0.12 using 190mm of external EPS insulation.

The use of thin joint technology in SIMS construction also helps to achieve better U-values. The 3mm mortar thickness means the mortar joint is 7mm thinner than your traditional mortar joint, which means your repeating thermal bridges throughout the blockwork is significantly reduced, and that improves the U-value of your wall. This improved thermal performance is another key benefit of using thin joint technology and SIMS by Mannok.

Again, because you have two thermal elements in the wall structure, the aircrete blocks and EPS insulation, your Psi values or your thermal bridging values in your building are going to be very good. The ideal scenario when designing a building is to create a box and wrap that box in insulation. Obviously that’s not possible due to windows, doors, junctions, etc., but by using Mannok aircrete blocks, a thermal element, as a structural element, and then wrapping that in external insulation, we can easily achieve excellent Psi values and thermal performance throughout the building. So, from a thermal performance perspective, by default, SIMS is a very good solution.

Using thin joint technology with 3mm mortar joints gives a very good airtightness in that it doesn’t dry away from the block in the same way that traditional sand cement does, so the joints between the blocks are going to be very airtight using the thin joint mortar.

Summary of SIMS by Mannok Benefits 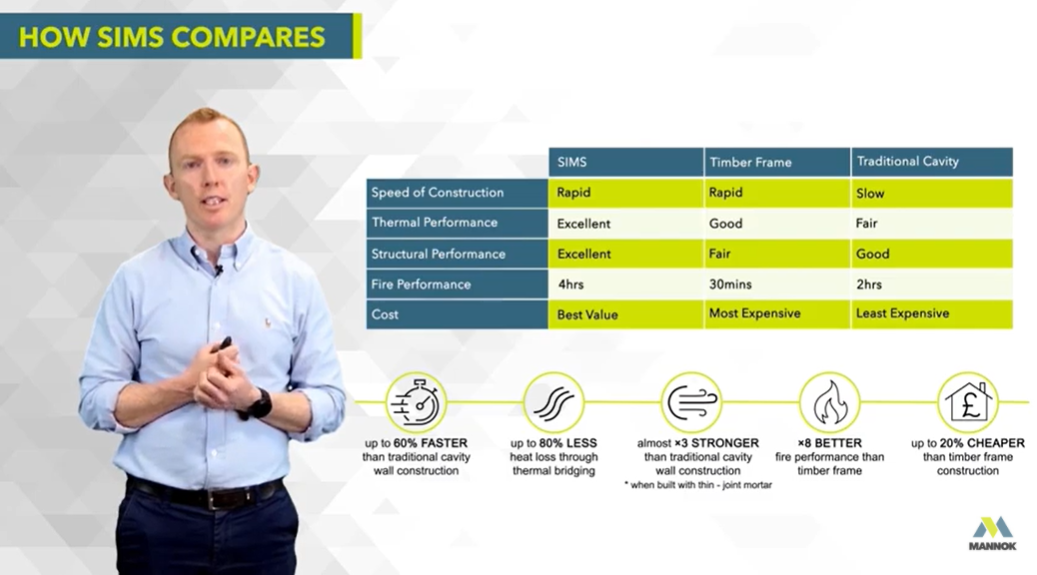 Faster: as mentioned previously, it’s 60% faster to build a SIMS wall than a traditional cavity wall, and it’s on a par with light frame construction such as timber frame or steel frame.

Stronger: SIMS is significantly stronger than traditional cavity wall construction, so there’s no issue at all from a structural point of view.

Thermal Performance: SIMS give you scope to achieve any U-value in your walls, and the use of combined thermal elements throughout and thin joint technology achieves better Psi values and improved linear thermal bridging.

Airtightness: Using thin joint mortar and having the airtight layer on the outside of the blockwork improves airtightness.

Zero Condensation Risk: The risk of interstitial condensation is eliminated by the use of external insulation.

Cost-effective: SIMS is cheaper to build than comparable rapid build methods such as timber frame construction.

So if you’re interested in SIMS by Mannok or have a project you’d like us to take a look at, please get in touch with our technical team: